The ‘Paradox of Choice’ says that being presented with a large number of choices increases anxiety in people. In today’s world, the pressure of this paradox weighs down more heavily on kids and young adults than it does on any other age group, thanks to the availability of so many academic and career options. Rising concerns by understandably worried parents have given rise to several ‘career counselling centre’, peddling tests and assessments that supposedly shine the light towards the right direction. However, so many of these ‘centre’ use unscientific methods that, at best, aren’t of any use at all and, at worst, can totally misguide students into a career path that is just not right for them. 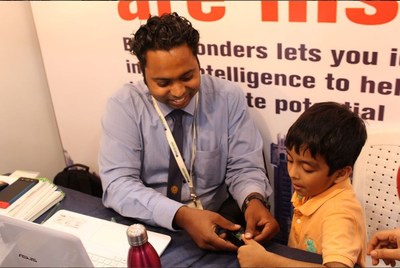 Realising this problem, Campion, an ICSE School in Fort, Mumbai, decided to help its students get the right head start to their careers. After a thorough analysis of many aptitude and psychometric tests, Campion selected DMIT as its tool of choice to help parents and pupils gain much-needed clarity in selecting the right career path.

Dermatoglyphics Multiple Intelligence Test (DMIT), is based on a branch of science in the study of the patterns of skin (dermal) ridges present on the fingers. It reveals the congenital links between our fingers and our intrinsic qualities and talents. While DMIT is useful for all age groups, it is particularly beneficial for parents and teachers to understand a child’s innate strengths as well as areas that need molding. Armed with this information that is obtained purely from the child’s biometric, DMIT assessments give crisp actionable insights and appropriate career recommendations.

Thus, from December 2017 – March 2018, Campion ICSE School collaborated with Brainwonders to conduct a fingerprint DMIT for the students of Standard 8th and 9th. For the last 75 years, Campion ICSE School has been imparting knowledge to its students. They recently celebrated the release of their platinum jubilee logo and special cover on 1st December 2017. With numerous extracurricular activities planned for the year 2018, taking up DMIT provided by Brainwonders was another step by this school towards making their students better leaders.

Brainwonders is the only certified company of the patented DMIT assessment which has an international collaboration with Wellgene Science Lab headed by Prof. Lin. As the results of the DMIT assessment unfolded for Campion students, parents across the board were amazed at the accuracy of the observations.

“Students find it difficult to sit for a long period and write various tests. This is one of the reasons we opted for biometric analysis provided by Brainwonders,” remarked Mr. Paul Machado, the Principal of Campion School. Pleased with the evaluation, he further stated, “This biometric analysis will assist the students to know more about their personality and choose a career that matches their aptitude. In fact, some parents even wanted their younger ones to undergo the test.”

PTA secretary, Capt. Sheriff D’costa said, “One issue that touches upon students and their parents is the choice of career after school. There is confusion and students often take their decisions under pressure.” He further added, “This is where Brainwonders DMIT comes into the picture. With the help of the DMIT, students could understand their areas of intelligence and make the right career decisions.” When asked about the accuracy of this test, Capt. D’costa mentioned, “The DMIT report presented was 100% true of what he believed his child to be.” In fact, the PTA member decided to do the test for himself and his two younger boys as well. He confirmed that the results were 100% accurate. Lastly, he added, “the report clearly defines the strength and weakness of an individual and strongly recommends Brainwonders DMIT to all.”

Mr. Manish Naidu, the founder of Brainwonders, said, “We had a great experience providing career guidance using the inborn genetic traits. The U.S. Patented DMIT chosen by Campion is our widely sought scientific and reliable method for personal and professional assessment.” Further, he added,” It was impressive to see the enthusiasm of the school and parents when the parents too took DMIT to understand their own traits and parenting styles. We thank Mr. Paul Machado for taking the scientific path to develop their student’s potential. The testimonials of the school principals, teachers and students  across India for the new technology have been very impressive adding further fuel to the fact that genetic analysis is the future.”

Brainwonders was established under the concept of Research and Development from Dermatoglyphic theory and the application(DMIT) from the latest technology. With the DMIT analysis, our analysts are able to discover the inborn intelligence of each child and the best way to learn. Moreover, professional advices and suggestions will also be given to help solve problems in both short and long-term.

We use cookies to ensure that we give you the best experience on our website. If you continue to use this site we will assume that you are happy with it.Ok